To get started, select an AUTOSAR system item structure and select the view via the Items Ribbon, or by selecting it in the View drop-down list. In our example below, it has been named "Architectural System Signals" . 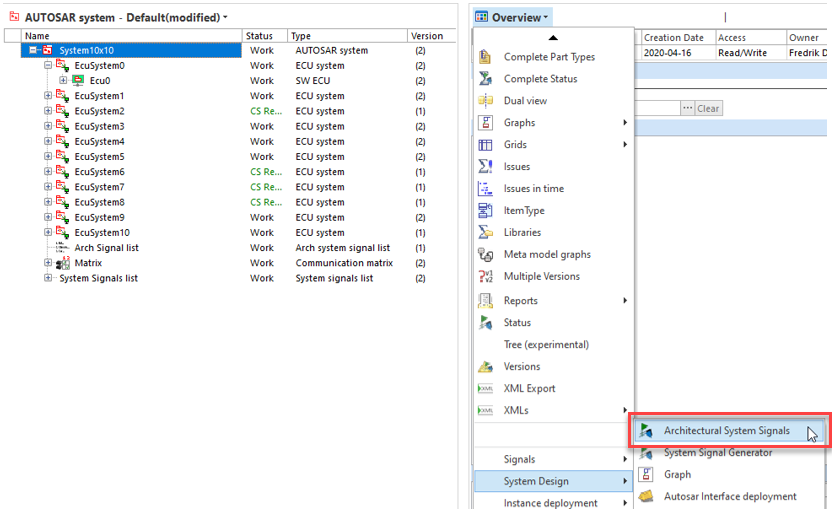 With an allocated AUTOSAR system selected, the view will present a list of system signals along with some filtering options to make working with a large number of signals easier.

The following information is displayed for each system signal.

The name of the signal

The ECU that the signal is sent from

The ECU that receives the signal

The ECU that sent this signal when it was approved

The ECU that received this signal when it was approved

Indicates whether or not the signal is included in the Arch system signal list and/or is faulty.

Indicates whether or not the version of an ECU in the ECU system is the same as the version in the Arch system signal.

When working with the signals in the list, multi-select is supported.

Some useful Filter options are available at the top of the view if you are interesting in only viewing a subset of signals. Multiple selections are ORed together. Filtering is useful especially with long signal lists.

Sorting is available by clicking on a column header, and is applied in a "cyclic" fashion: first click to sort descending, second click to sort ascending, third click returns to unsorted.

To include a signal in the Arch system signal list that is not currently included, i.e., it has an Inclusion status of "Not included", right-click anywhere on the row and select Include system signal.

Setting an Inclusion status to "Ignored" means that you are making an active decision to not include it. It is "handled" and added to the Arch system signal list, but as a different part type.

To ignore a signal, right-click on a signal in the view and select Ignore system signal. 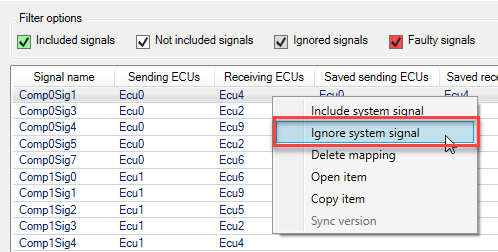 Ignored Arch system signals are typically hidden from view in the structure tree, and are not visible in system signal generation nor routing decisions views.

How you handle a faulty signal will depend on the reason it is faulty. Using the Faulty signals filter option is useful for ensuring that you are viewing all faulty signals.

A signal can be faulty if the Arch system signal is missing a receiving ECU.

By selecting the Arch system signal and looking at the Parts view, you see that there is no Receiving ECU.

To fix, right-click on the signal row and select Include system signal.

This will add the missing Receiving ECU.

A signal can be faulty if the Arch system signal is missing a Sending ECU or Sender receiver interface.

By selecting the Arch system signal and looking at the Parts view, you see that there is either no Sender receiver interface or no Sending ECU.

To fix this issue, you can delete the mapping by right-clicking on the signal row and selecting Delete mapping.

If there is a version mismatch between the Sender receiver interface in the ECU system and the one in the Arch system signal, this will be indicated with a Version status of "New version". To fix the mismatch, right-click on the signal row and select Sync version.

The right-click context menu offers Open item and Copy item options where are available when Included or Ignored signals are selected in the list.

When opening 5 or more signals at a time, you'll be asked to confirm the request before continuing so as not to open a large number of signals unnecessarily.