The Signal Routing Decisions view is used for defining expected System Signal routes through a topology.

A route is defined by a number of steps where every step has a source controller, a channel, and a target controller, and finally a next step.

The view is accessible via menu options on the ribbon that have been configured by an Architect. An option becomes available when an item is selected for which the view has been configured. Below is one example of a configured option.

They are also available via the View drop-down at the bottom of the list by ribbon group name.

The Signal Routing Decisions view lists all signals that have been approved in the System Signals view together with a summary of the routing information. 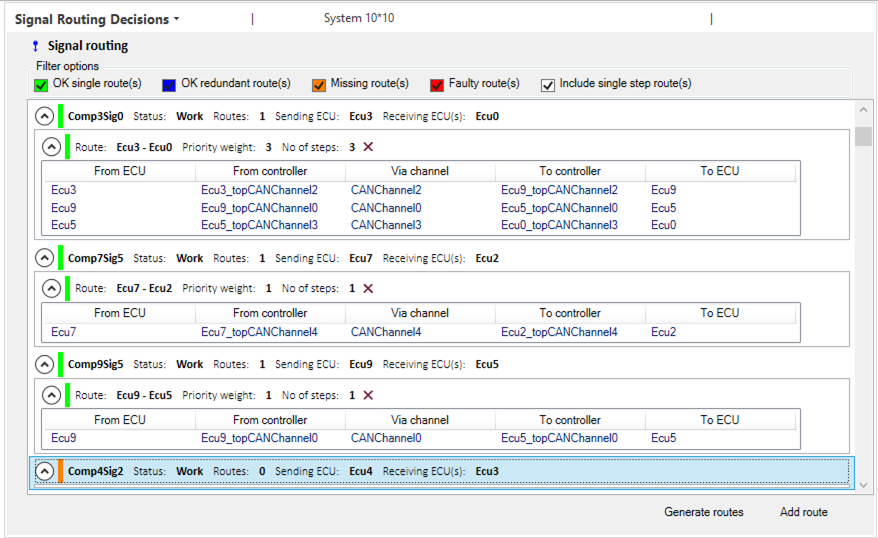 Every row corresponds to an Architectural System Signal:

If you press the Expand button to the far left, the routes defined for the signal are expanded and shown.

The color indicates the status of the signal's routing.

The leftmost bold text is the name of the signal.

Indicates the number of routes for the signal.

The ECU that the signal is sent from.

The ECU(s) that receive the signal.

If you expand a signal, the routes are shown together with a summary for each individual route:

In this case the signal is received by two ECU:s so there are two routes defined.

Below is an explanation of the route section and information.

If you press the Expand button to the far left, the detailed route information is shown for the selected route.

The color indicates the status of the route. Below is a list of the different colors and their meaning.

Shows the sending and receiving ECU for the route.

Shows the number of channels that are included in the route.

Press this to remove the route. Note that routes can only be added and deleted. They cannot be partly modified.

If you further expand the route, you will get a detailed list of each step in the route. A step describes how a signal travels over one channel.

Below is an explanation of the different elements relating to route steps.

The ECU that sends the signal over the channel.

The controller on the sending ECU that sends the signal over the channel.

The channels that the signal is sent through.

The receiving controller on the channel.

The receiving ECU on that channel. This ECU will be the sending ECU in the next route step unless the final receiving ECU has been reached.

To add a route for a signal, select the signal and click Add route. A dialog will display all possible routes not already chosen for the given signal:

Add a route by selecting it and clicking Add route. To cancel the selection of a route, click Cancel.

To generate routes for every system signal that only has one potential path between every sending ECU- receiving ECU pair, click the Generate routes button. This operation does not overwrite already created routes.