The XML Import option enables you to import a model on top of an existing model using SystemWeaver XML. The view is used for both imports of new items and imports to update existing items. It uses various methods to detect "same" things in the model and imports and performs updates accordingly. When using the XML import view, the match is against objects in the selected item structure tree, while the Import from XML option looks for objects in a specific library. Option settings in the XML Import view may be pre-set by a SystemWeaver Architect for specific purposes, and the view may only be available for specified item types as defined in a configuration. If you are unsure which XML Import option to use, contact your system's Architect.

Select a top-item in a structure for which the XML import view is available. Then, select the XML Import option from either the Items Ribbon, if a menu option has been configured by an Architect, or by selecting it in the View drop-down list. In the below example, the custom configuration is called "XML Import 1". The naming is set by an Architect. 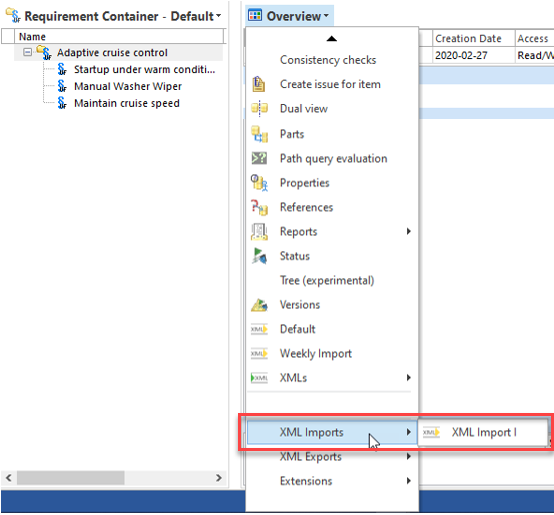 The view is divided into three sections: 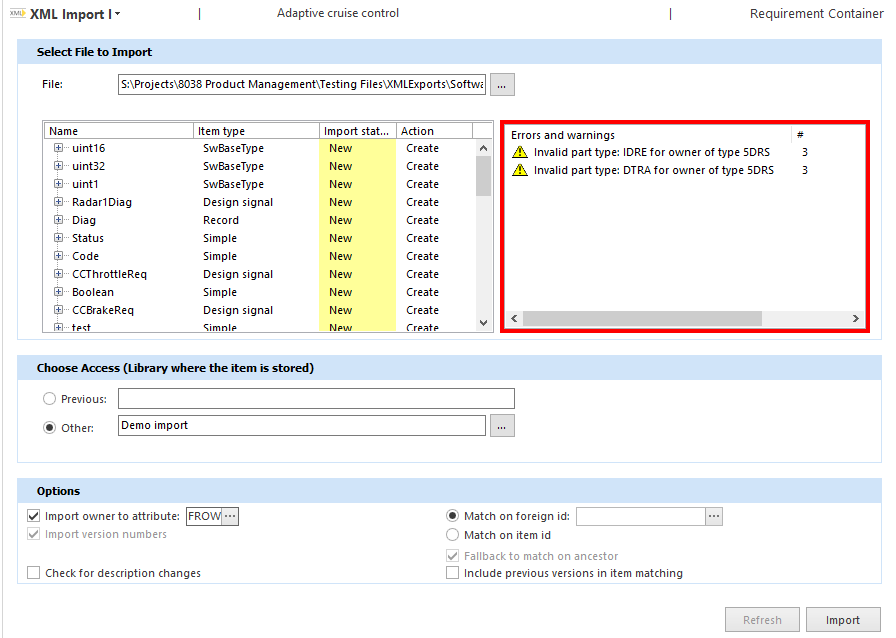 In this section, you browse out and select the SystemWeaver XML file that contains the data that you want to import.

Once you make your selection, the following information will be displayed below the selected File:

Name lists the name of the items in the current item structure, and their parts.

Item type displays the type of the item.

Import Status indicates the status in the XML file with respect to the current model.

Action lists the actions that will be performed upon import.

<blank> means that no action is required for the update of the current model.

The import status and actions are based on the matching of objects in the target database with those in the XML file.

If there is any problem with the update, a box to the right, with a red border as seen in the example above, will list all such problems. An example of a problem is when the import uses types that are not defined in the importing database, or when there are versioning problems that need to be fixed.

Whether or not warnings

will be allowed during imports, is defined by a SystemWeaver Architect in configurations.

In the Choose Access section, you define the library to be used for all new items created by the update. New versions will be located in the same library as current library. Only libraries to which you have "Write" access will be displayed by default.

This section lists available settings for the import:

Example of Owner imported to Attribute with SID=FROM:

After Import to Target Database:

Check for description changes specifies if the Description will be checked for changes. If set to "True" and there are changes to the Description of a released item (as in the example shown below), the result will be to force a new version.

Match on foreign id matches the imported IDs with the Foreign ID properties of the objects in the database. The Foreign ID property is normally used, both for items imported from some other tool or file format, and for items imported from another SystemWeaver database. In the box to the right of this checkbox, you can enter the namespace used in the source database. Prefix of foreign ID is used when you want to be able to identify which items have been created in which database, and is typically not used often.

Include previous versions in item matching specifies if the import should look in the version history of the objects in the database for matches.