An Overview of Item Status

SystemWeaver is based on fine-grained versioning, meaning that every item has its own version history and status.

The Status of an item, together with access rights, determines if the item can be changed, and if new versions can be created for the item. According to the model, all versions of an item apart from the last version must be in Released or CS Released status, and cannot be changed.

The following item statuses are available:

The item is editable by any user having "Write" access to the item. This status indicates that the item may change at any time without notice to other users.

This status indicates that an item is preliminary ready for use by others. No user may change the item. Only the Owner, Root users or users having "Change" access rights may perform the Thaw operation to open it for editing again.

The Frozen status in SystemWeaver can be very practical There are many cases where you are not ready to release an item, but you still want to prevent changes by mistake, and for those cases Frozen is a suitable status. Another purpose of the Frozen status is to use it as an intermediate state before being Released, as part of releasing a large structure. Then, while any versioning conflicts are being resolved, all checked items can be moved to Frozen until finally all items are frozen and consistent. Then all items can be Released.

This status indicates that an item is not editable and cannot be made editable by anyone. Any user may, however, create a new version from a released item. New versions are traceable using the standard mechanisms of SystemWeaver. Note that whenever an item gets Released, it will forever remain in status Released or CS Released, while any new version of the item will start its life in Work.

Complete Set Released.  This status has the same meaning as Released, except that this status can only be set if all parts and sub-parts are in status Released or CS Released. As mentioned above, once all items in a structure are set to Released, the top item in that structure will automatically be set to CS Released. The CS Released status thus guarantees that the entire item structure is at least 'Released'. This is normally the status you want when releasing.

The statuses and possible transitions are illustrated below. There are four primary views where item status can be managed as you work. 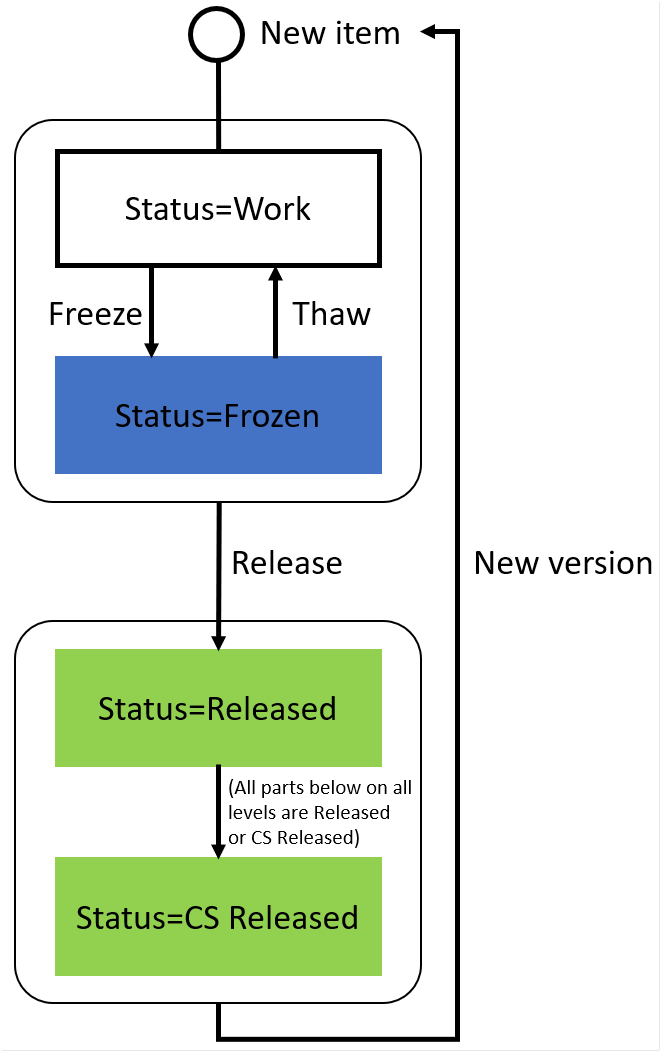