When you define, for example, a test results report, you can configure to have it include a green-colored "OK" column to display for tests that have gone well. Unfortunately, at this time, you cannot obtain the same type of coloring for an attribute that is based on a specific condition, e.g., for attribute values of less than 10, display a green "OK". What you can do is associate colors with different enumeration values using the Edit Attribute Type dialog in SystemWeaver Architect.

In the below example, OK is green, Not OK is red, etc. Since test results are enum attributes, a grid component can use the attribute's associated color to indicate, for example, "OK" for values that are less than 10. 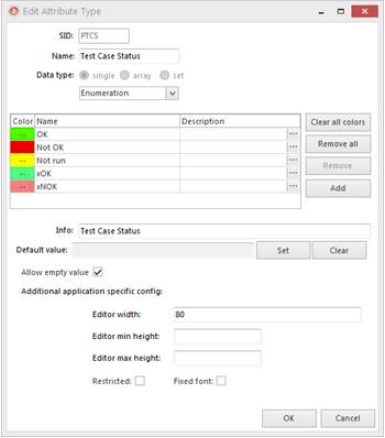 In your report, use a TextColumn to specify, for example, if a value is less than 10. If you also configure to leave the column blank for other values, the visual indication appears even clearer.

You can also set a sort for the text values and can even go so far as to define your own divalent enum (with colors) and then explicitly assign that attribute when the value is less than 10. Then you get a colored column, but it will not be the actual value column. This is basically the same as the above proposal, but with color instead of text.