The SystemWeaver Script Language together with contexts can be used to generate information in reports and documents for complex scenarios that the basic report generation features cannot handle. It also provides a means of counting items and following parts backwards in the defined context. In addition, it enables you to "merge" different perspectives. This article gives a basic introduction to SystemWeaver Script Language in item report generation in SystemWeaver.

The answers to all exercises in this article can be found on the Script Training>Answers ribbon tab in the database linked abovef:

Note: This presentation does not cover GUI and view concepts. 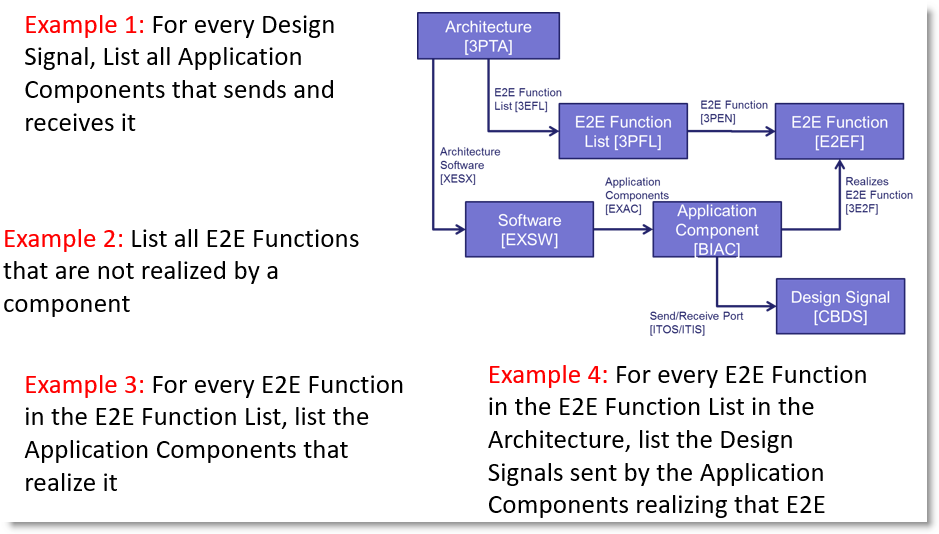 By using contexts, you take a different approach than using the basic report generation features:

What is a Context Tree?

A context tree is a filtered collection of data where only the relevant information is present. 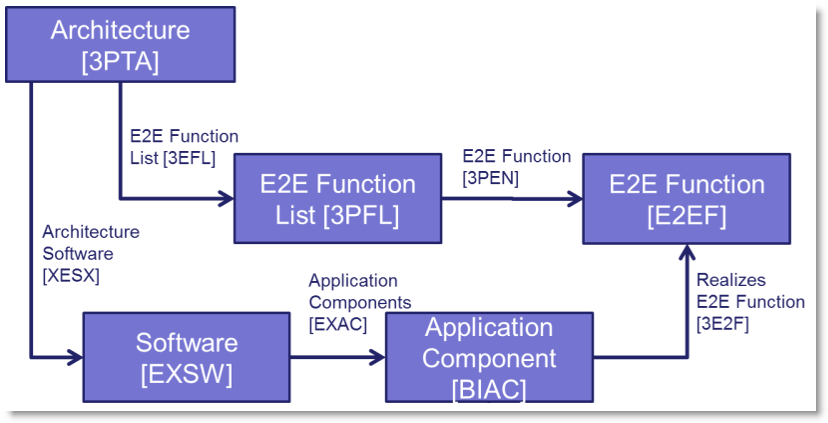 From the Architecture, list all E2E Functions in the E2E Function List using the script language and contexts. 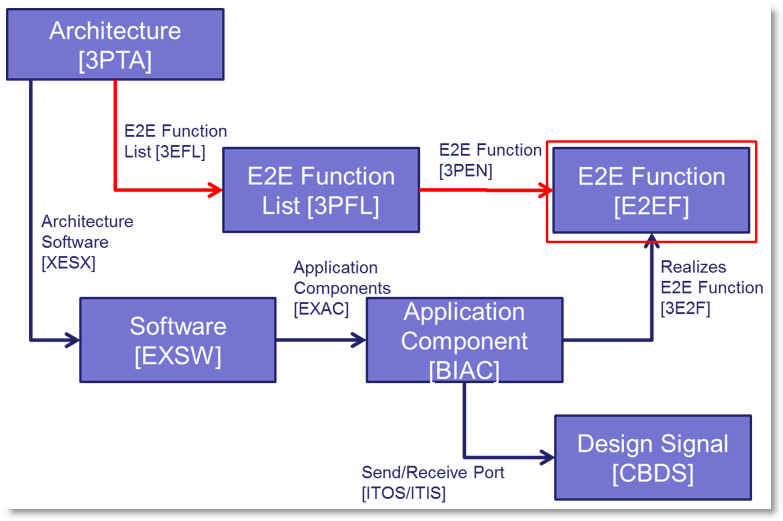 The AddParts tag is always applied with at least the four attributes of owner, sid, part and defobj. 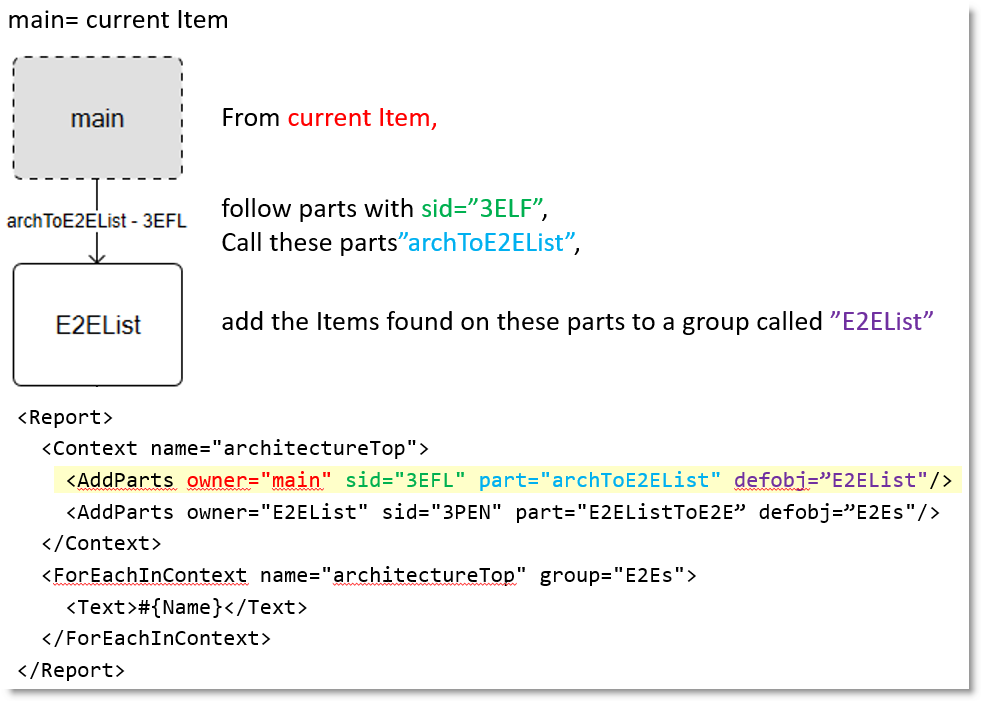 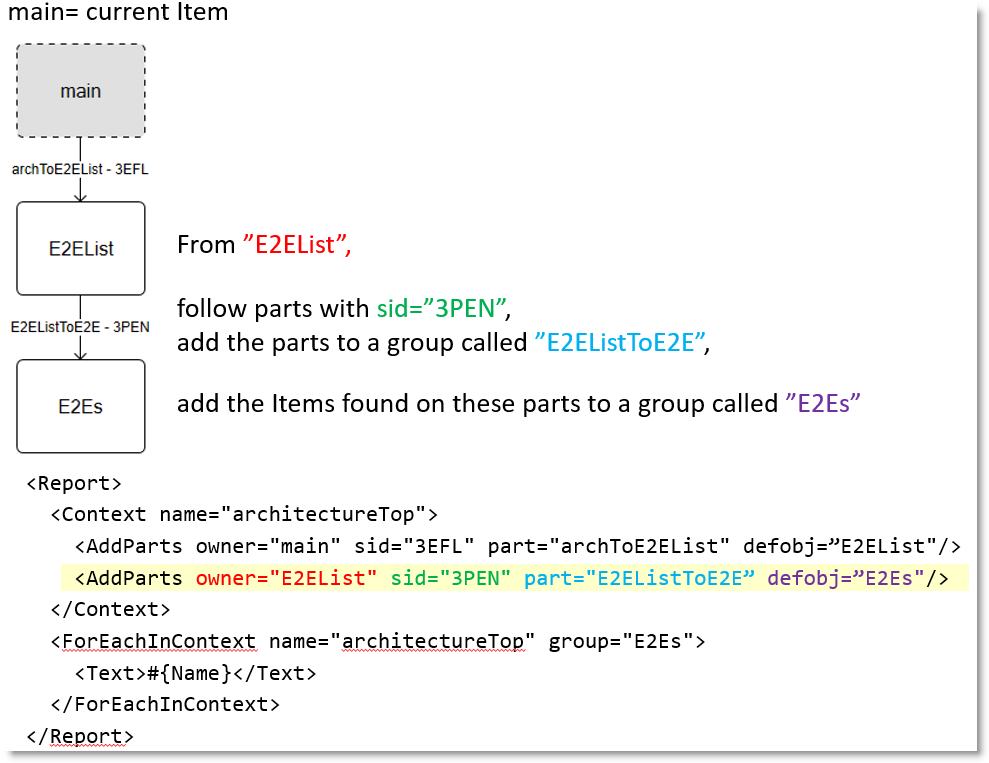 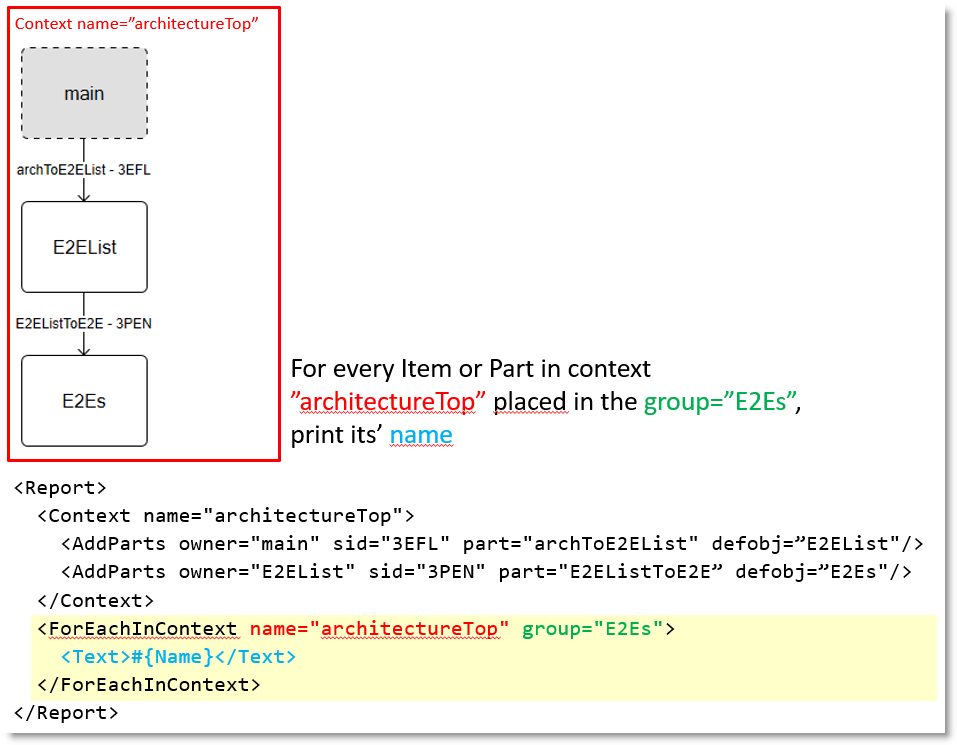 The <ContextGoBackToPart> tag is used to traverse backward in the context tree, following the part-group (predefined in <context>) and specified by part="". This tag results in a list of parts as opposed to items. 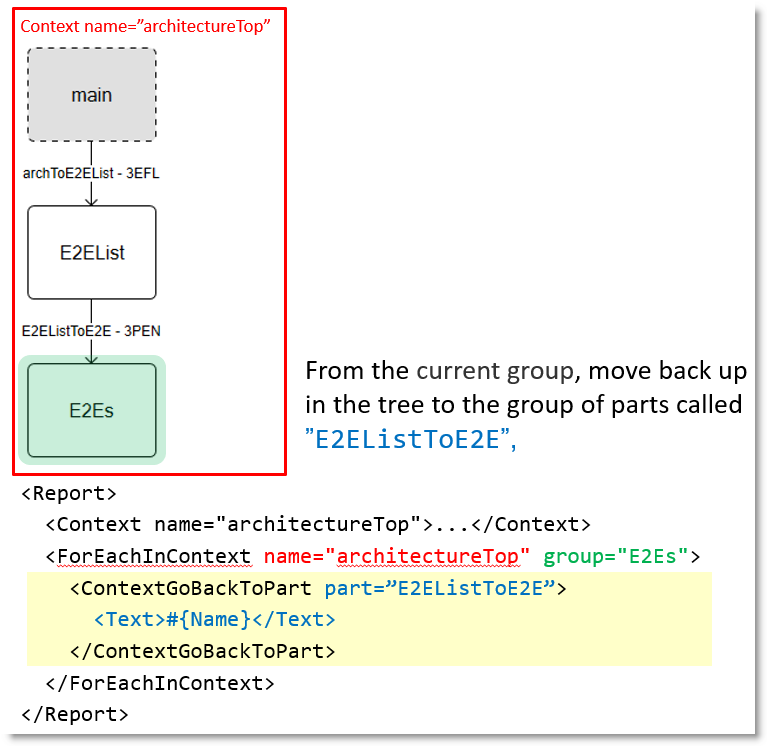 The <ContextGoBack> tag is used to traverse backward in the context tree, following the part-group (predefined in <context>) and specified by part="". This tag is the same as <ContextGoBackToPart> except that it results in a list of items as opposed to parts. 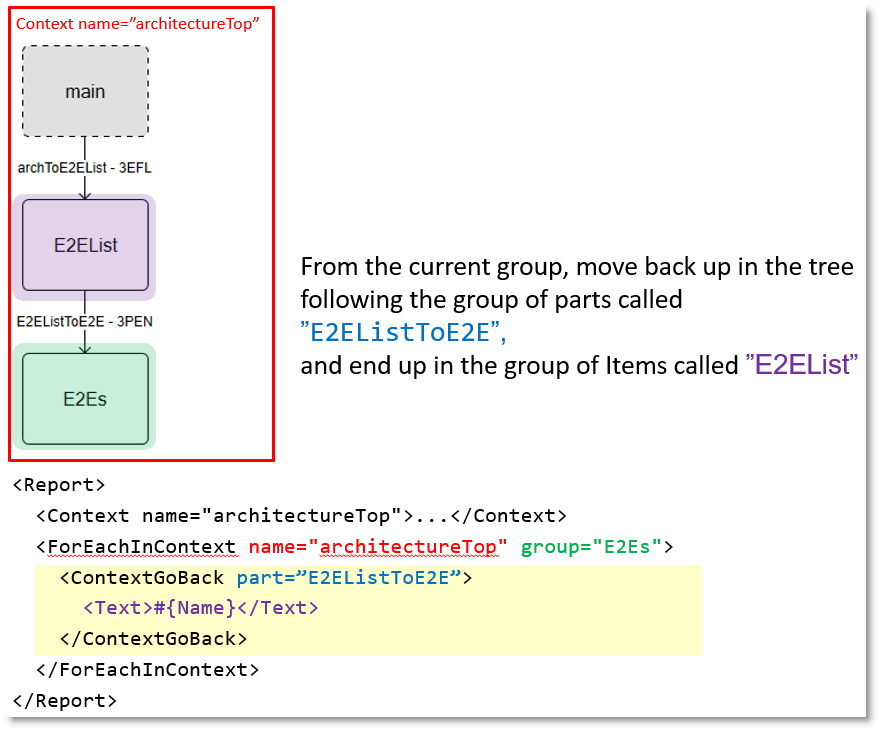 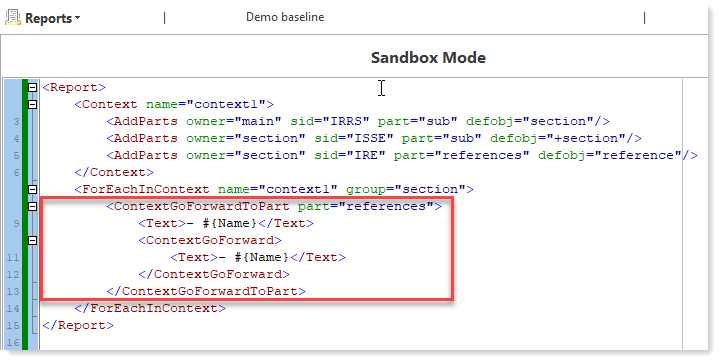 Note: The "+" operator will add items to the same group by a union operation. This means that the same item will not be added twice even if it exists in two places.

The graphical representations shown in this article are rendered by the Context Visualizer tool. When you have created your context in the report editor, highlight it and then right-click and select Show context visualizer to get a graphical presentation of your context.

You can learn more about this tool and its menu options in the Help. 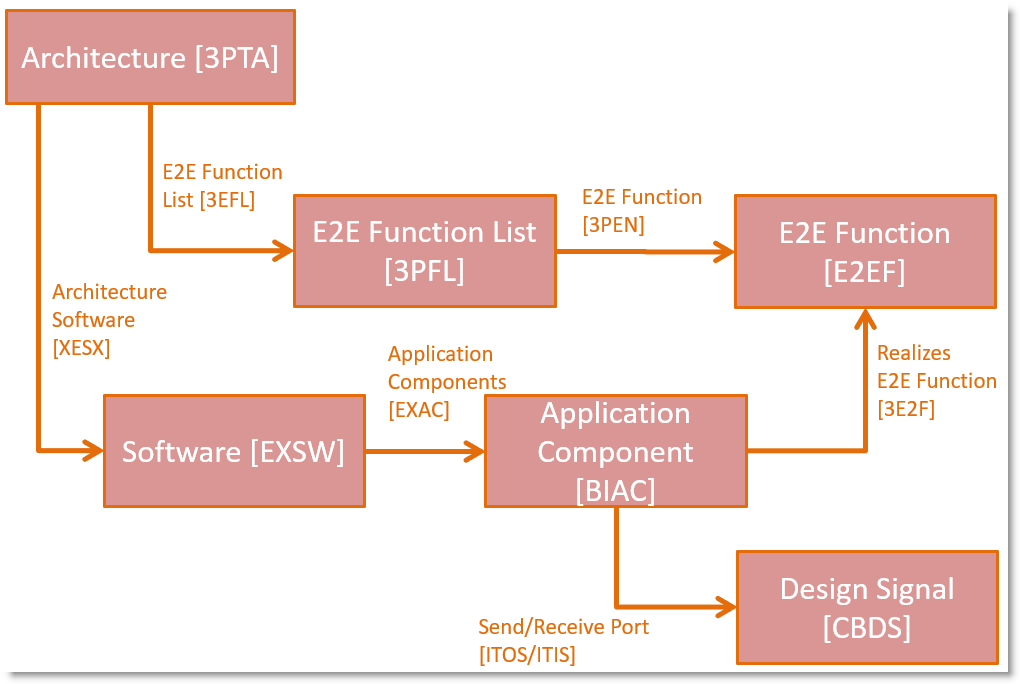 Tip: To produce an empty row for readability between each context in your definition, use <Text></Text>.

For each component, list the Design Signals that it sends and the components that receive that design signal. 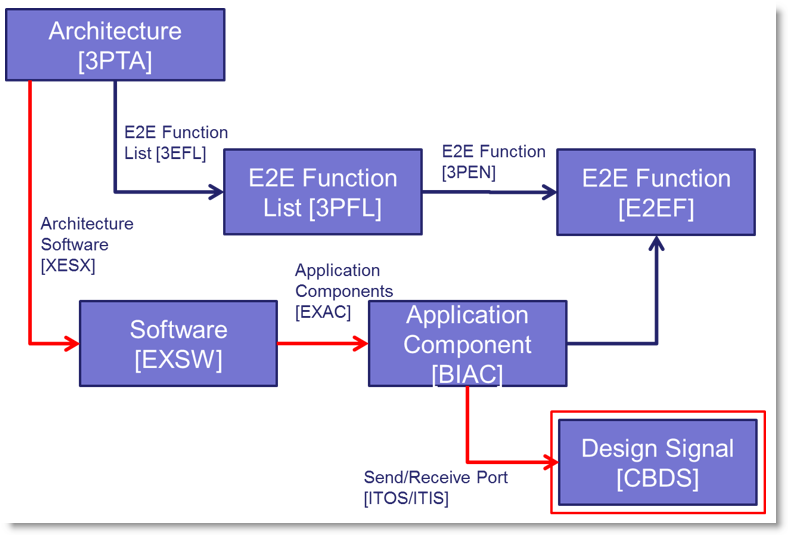 By combining groups of Items, it is possible to ”Move forward” along one part defined into a group and then ”Move back” following another part:

Combining Groups of Items - A Note on "+"

When adding items to the same group more than once, you can modify the behavior of how they are added by including or omitting the ”+” symbol.

The ”+” indicates that you want to perform a union operation, adding all the newly found items to the already existing group, establishing relations to items already existing in that group.

By omitting the ”+”, new items will not be added to the group, but you establish relations to items already existing in that group.

We hope that you are pleased with this course and have increased your knowledge of the script language. You can extend your skills by practicing the numerous scripting options described in the SystemWeaver Script Language reference section in the Help. 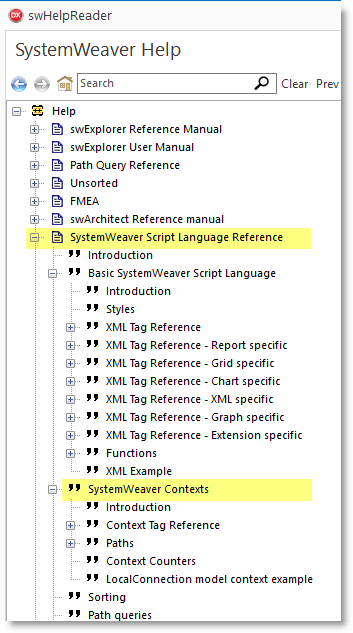